$10 OFF + FREE U.S. SHIPPING WHEN YOU ORDER TODAY
! LIMITED QUANTITIES REMAINING !
FROM POOP TO GOLD
The Marketing Magic of Harmon Brothers 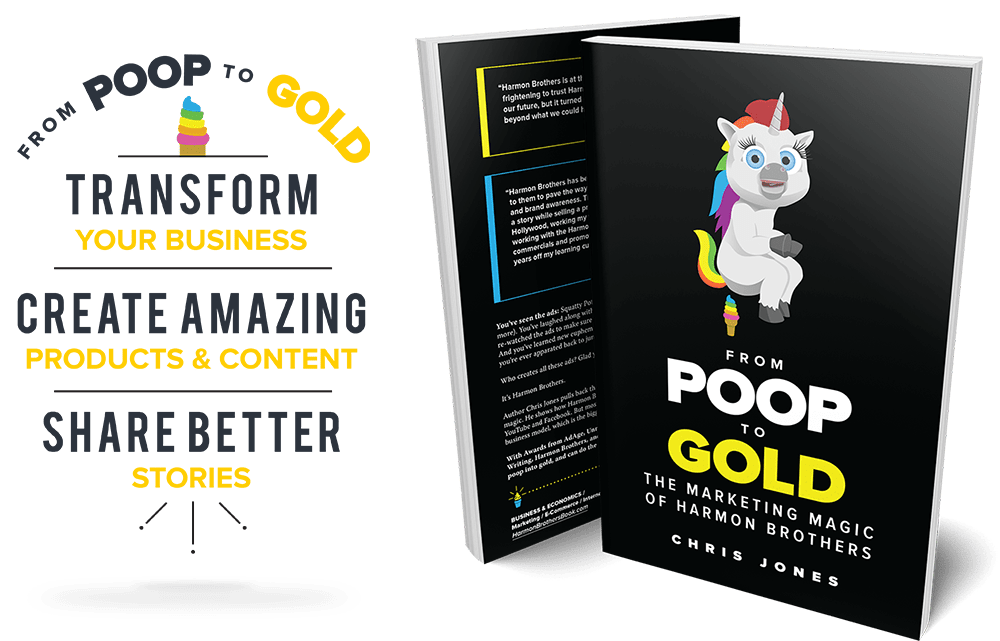 ...an interesting deep-dive into the magical world of the Harmon Brothers, one of the most successful creative shops in the ad industry to date.”
1
shipping
Where To Ship Book
2
your info
Billing Details
Shipping
GIVE ME THE BOOK! W/ FREE U.S. SHIPPING
We Respect Your Privacy & Information
Edit Shipping Details
Item
Price
$19.97
$12.97
$12
Your order has been declined. Please double check your Credit Card Details or contact support for information.
Credit Card Number:
CVC:
Expiry Month:
Expiry Year:
Item
Amount
Dynamically Updated
$XX.00

ONE TIME OFFER - ONLY $12.97 (OVER 57% OFF!): GET THE DIGITAL BUNDLE (Audiobook + eBook) PLUS 3 FREE BONUS VIDEOS for less than the price of just the Audiobook! Get instant access to the digital copies so that you can dive right in, plus get a 3 free bonus videos with tips to improve your video ads instantly. 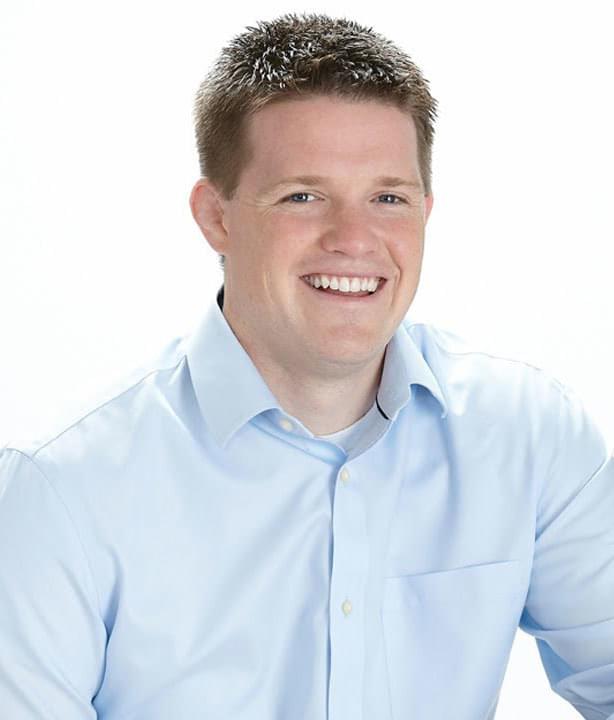 “Harmon Brothers have figured out a way to blend comedy, branding and direct response into ads that cause people to laugh, like, share, and then buy.
“It's rare to find an ad that can do one or even two of those things, yet they have an almost flawless track record of hitting all four of those reactions in every video they create.

“In an advertising world where people are spending money they don't have to create ads they hope will someday build a brand, the Harmon Brothers have mastered the art of making videos that profitably grow your brand from day #1. I'd rather watch their commercials at home on my computer, than go to a Hollywood-produced movie with my friends.” 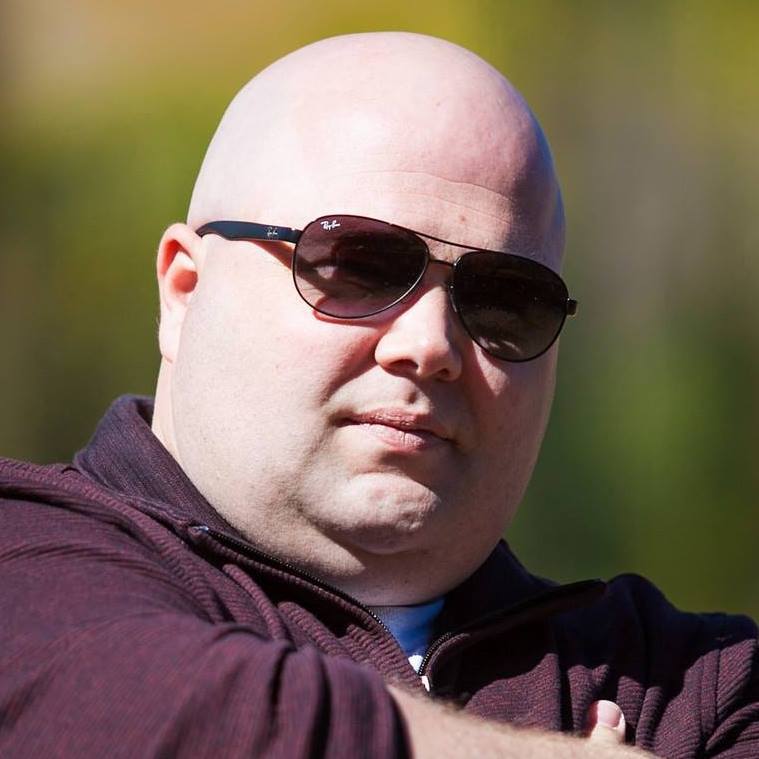 “Not only will I be applying some of these principles to my work, but also to my life.” 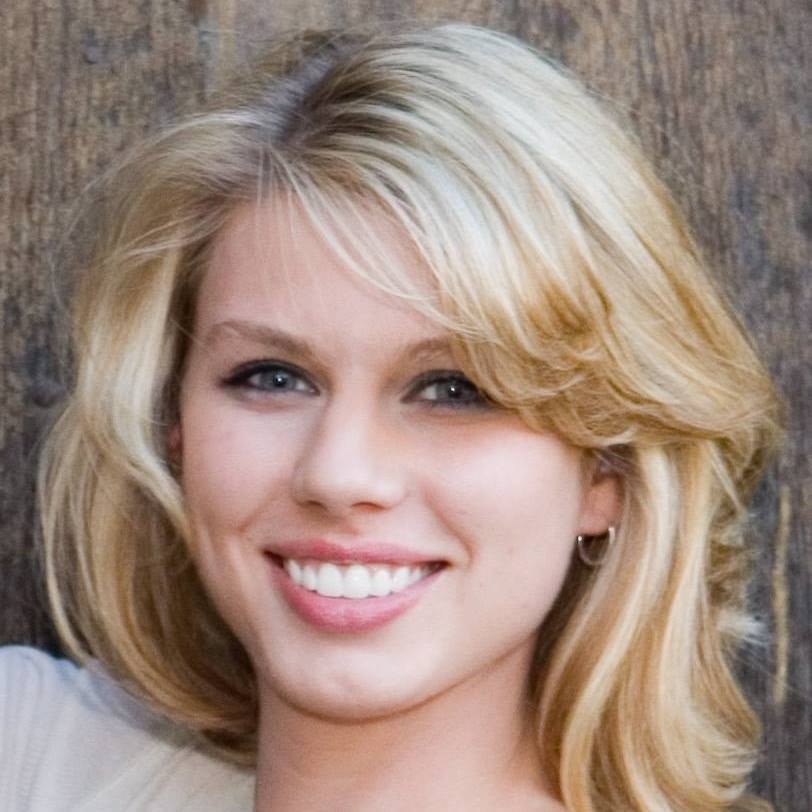 “Harmon Brothers is swimming upstream through schools of other companies who are trying their best to protect their secrets and find the easiest way down the river.”

“Here’s the Story of How a Pooping Unicorn Became Marketing Gold”
It’s not luck or chance or even creative brilliance that got the Harmon Brothers where they are today. As it turns out, it’s a combination of Idaho potato-farm work ethic and corporate libertarianism.”
RETAIL: $29.95
GET THE BOOK - ONLY $19.97 WE'LL COVER U.S. SHIPPING!
If you've ever wondered HOW to build a company that thrives because of—not in spite of—each team member's own desire to thrive, this book is for you.
See how Harmon Brothers take a different approach to nearly everything: 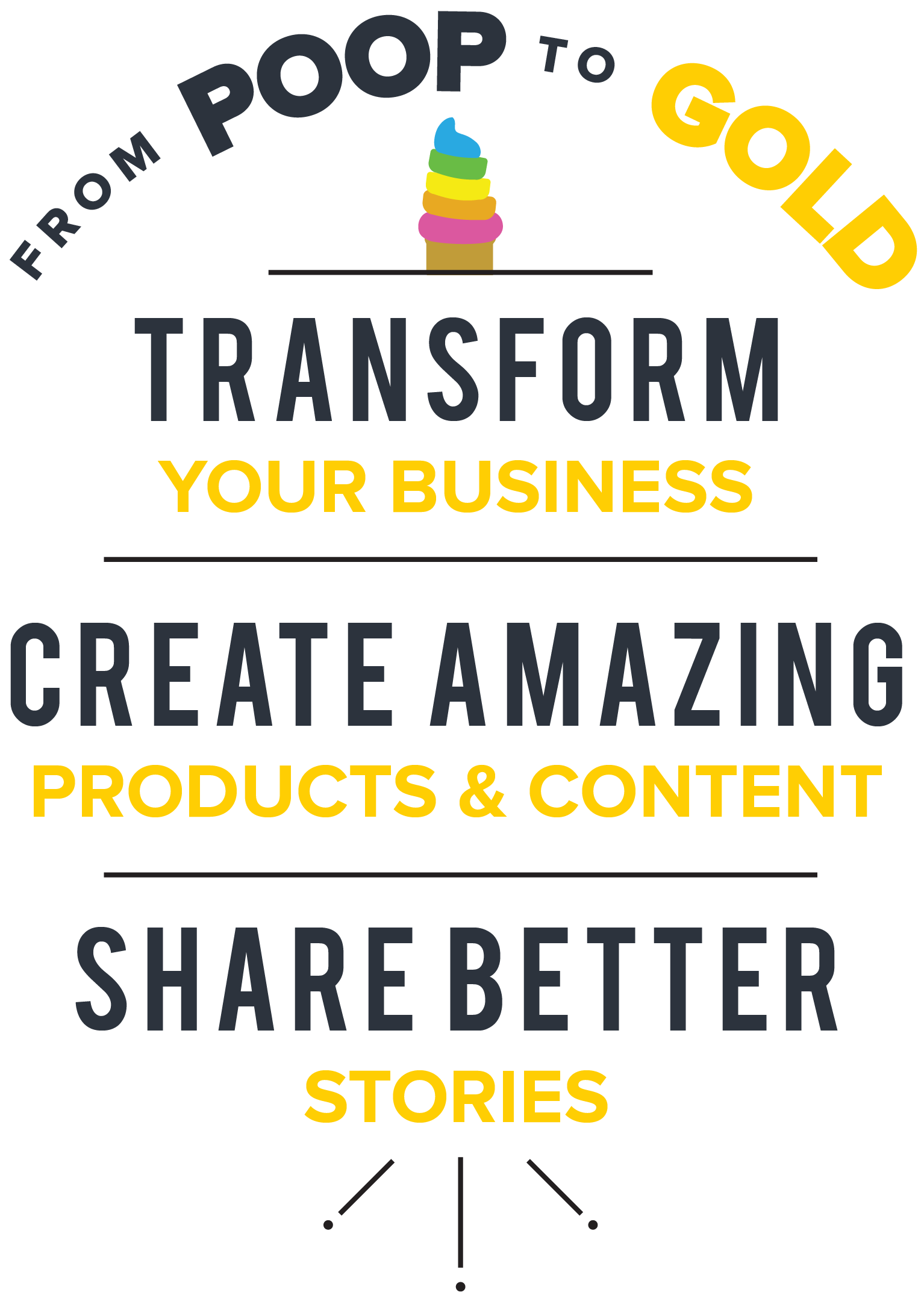 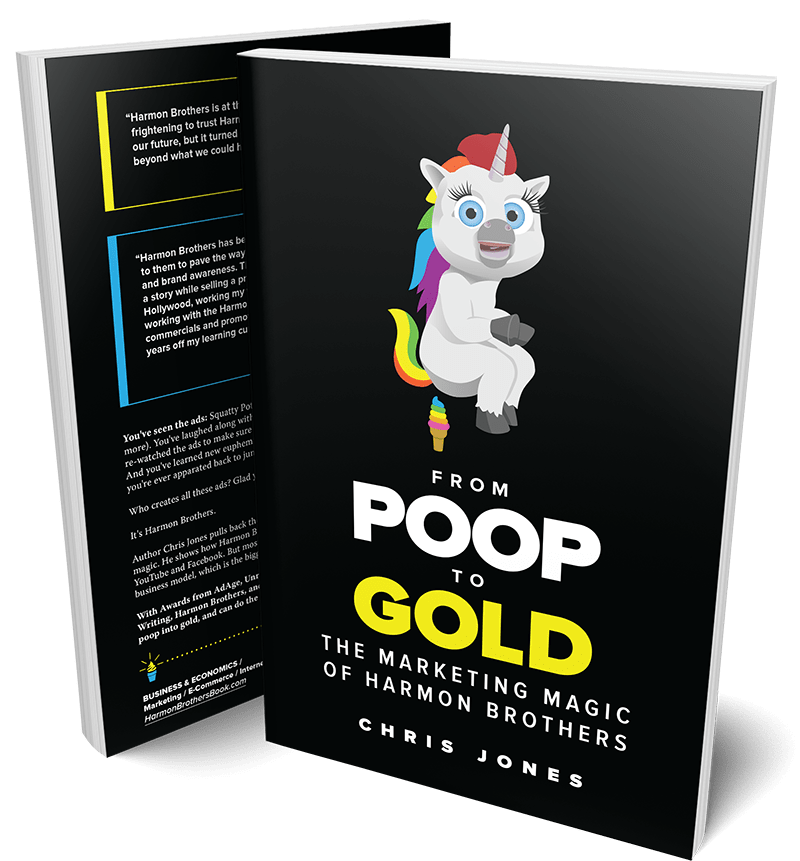 Go behind the scenes of some of the most successful video ads in internet history—and the lessons learned along the way.
With Awards from AdAge, Unruly, ADWEEK, and a WEBBY for Best Writing, Harmon Brothers—and their revolutionary model—transform poop into gold, and can do the same for you and your company.
RETAIL: $29.95
GET THE BOOK - ONLY $19.97 & FREE U.S. SHIPPING! 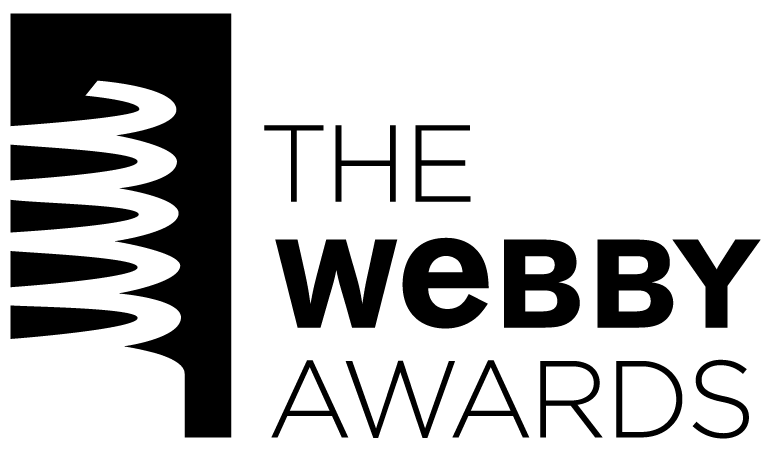 “Spending time behind the scenes with Harmon Brothers
forever changed the way I think about business and life.”
Originally more of a history of Harmon Brothers, From Poop to Gold changed in form as it changed me, its author. I began to see dozens of applications of the Harmon Brothers' business model, and ways it could potentially be much more than just a recitation of facts and events.
The principles I talk about in the book—they work. They aren’t just talk. The Harmons, and the entire team that is part of Harmon Brothers, really believe in the principles that undergird the company, and they try very hard to act on them, every interaction, every day.
American business is often dysfunctional, a clear contrast to the often chaotic but always collegial—and successful—model at HB. More, the HB system both treated its employees like adults and allowed them to behave like human beings, unique and powerful in their own ways. It was a story that needed telling. It changed the way I think about business and life—and it will do the same for you.
RETAIL: $29.95
GET THE BOOK - ONLY $19.97 WE'LL COVER U.S. SHIPPING
LIMITED-TIME PROMO  - ORDER TODAY 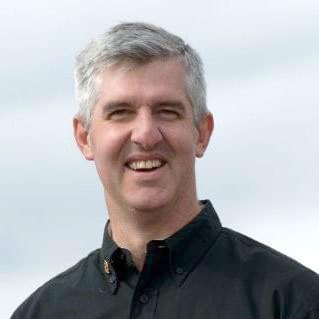 meet the MAN behind the book
CHRIS JONES
Chris Jones is a veteran writer with dozens of publications, both fiction and non-fiction, over a fifteen-year career, including an Amazon top-15 book in advertising and marketing.
When not writing, he can almost always be found in the middle of a classroom of teenagers, teaching history and English to junior high and high school students. Chris lives in Lehi, UT with his long-suffering wife Jeanette and their eight children. 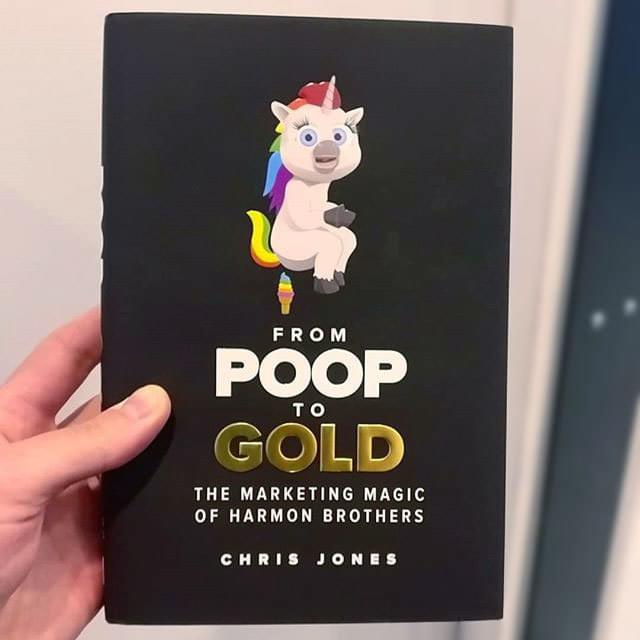 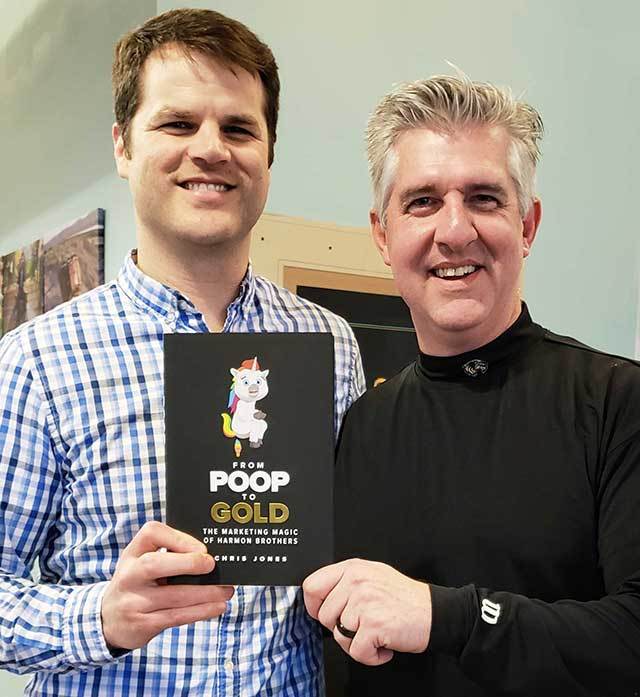 What People Are Saying About "From Poop to Gold" on... 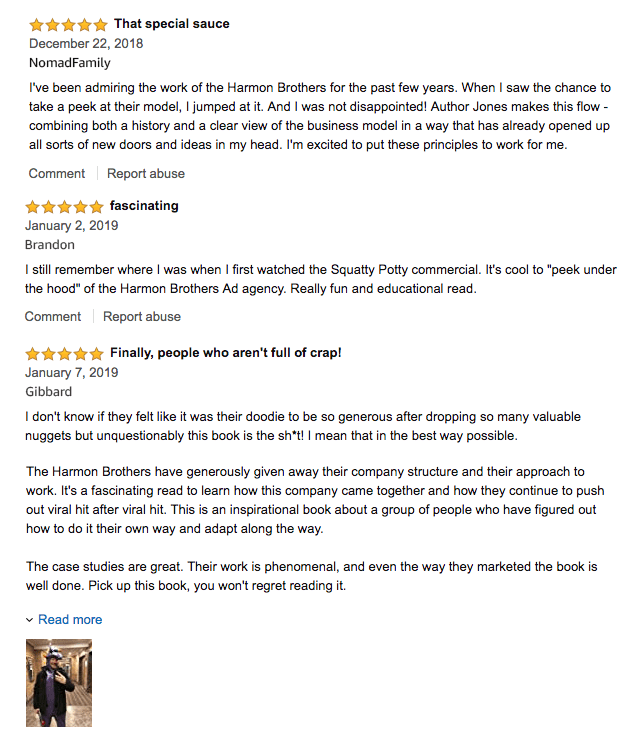 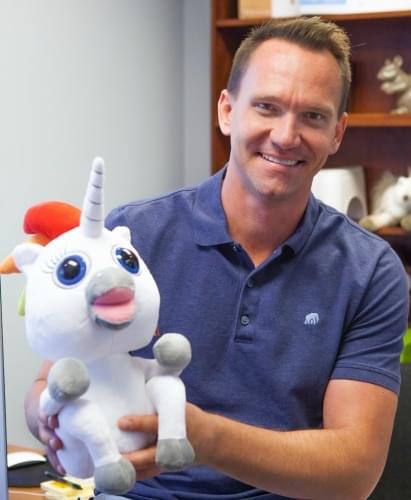 “Harmon Brothers is at the forefront of the market. It was frightening to trust Harmon Brothers with our reputation and our future, but it turned out their creativity produced a future beyond what we could have imagined.”
BOBBY EDWARDS
SQUATTY POTTY CEO 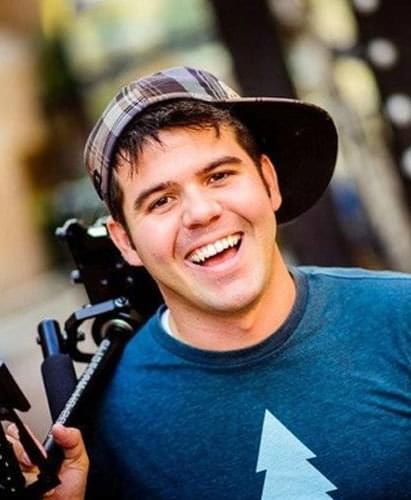 “Harmon Brothers are way ahead of their time: telling a story while selling a product. My plan was to spend 30 years in Hollywood, working my way up the ranks. But after a year of working with the Harmons, I was directing nationwide commercials and promoting products my first year—they cut 29 years off my learning curve.”
DEVIN SUPERTRAMP
Videographer and Social Media Guru
RETAIL: $29.95
ORDER NOW - ONLY $19.97 WE'LL COVER U.S. SHIPPING!
LIMITED TIME PROMO - ORDER TODAY
What People Are Saying About "From Poop To Gold" 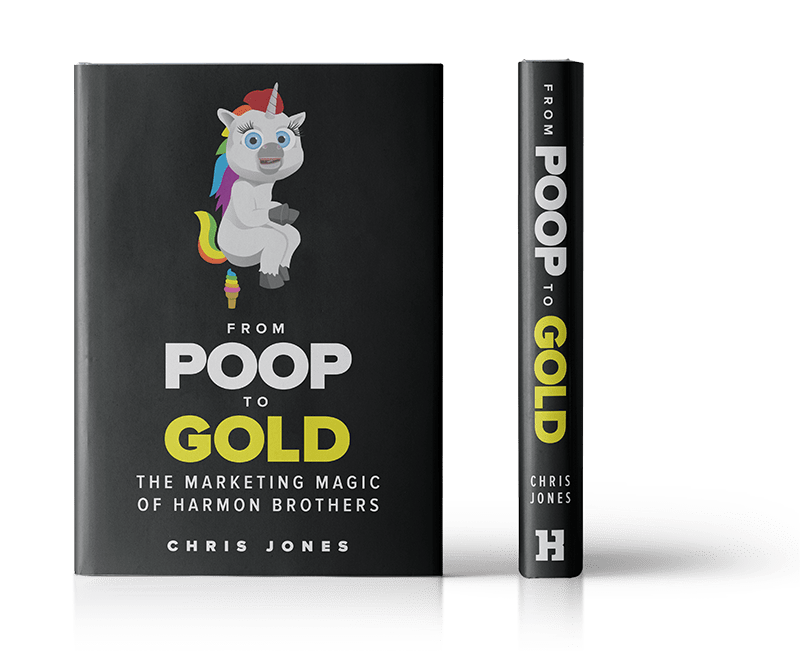 “Not only will I be applying some of these principles to my work, but also to my life.”

“Poop to Gold inspired me to see how I can bring my work to a new level. It showed me ways to seek inspiration, collaboration, innovation, challenge, and results. Harmon Brothers’ unrelenting siege on tradition was eye-opening.”

“This level of transparency is unprecedented, and speaks volumes about Harmon Brothers' desire to make the world better—and the confidence they have in their team.” 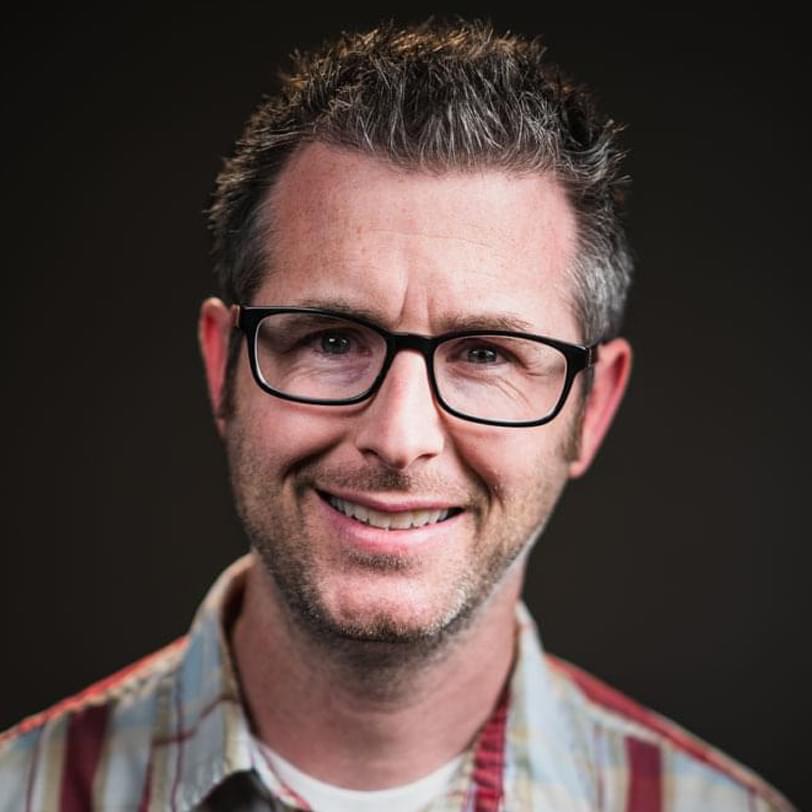 “A fascinating look into how everyone ought to be doing business—and life.”

Brett Crockett
Too close to be objective

From Poop to Gold
THE MARKETING MAGIC of harmon brothers
LOOKING TO PURCHASE MULTIPLE COPIES FOR FRIENDS OR AS CORPORATE GIFTS? EMAIL US FOR BULK PRICING: COMMUNITY@HARMONBROTHERS.COM
COPYRIGHT @ 2021 - ALL RIGHTS RESERVED | GDPR
ONE TIME OFFER - ONLY $12.97 (OVER 57% OFF!): GET THE DIGITAL BUNDLE (Audiobook + eBook + FREE bonus videos) for less than the price of just the audiobook! Get instant access so that you can dive right in, plus get 3 free bonus videos with tips to improve your video ads instantly. 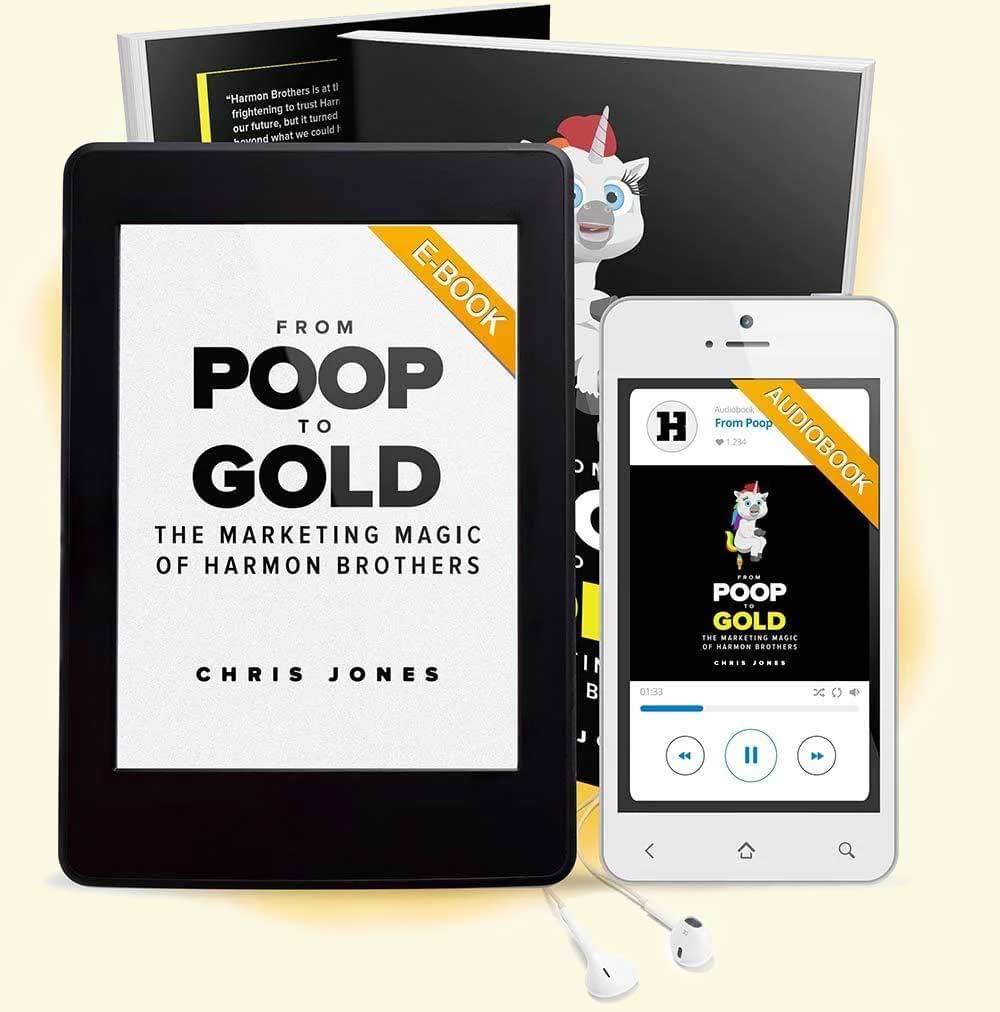